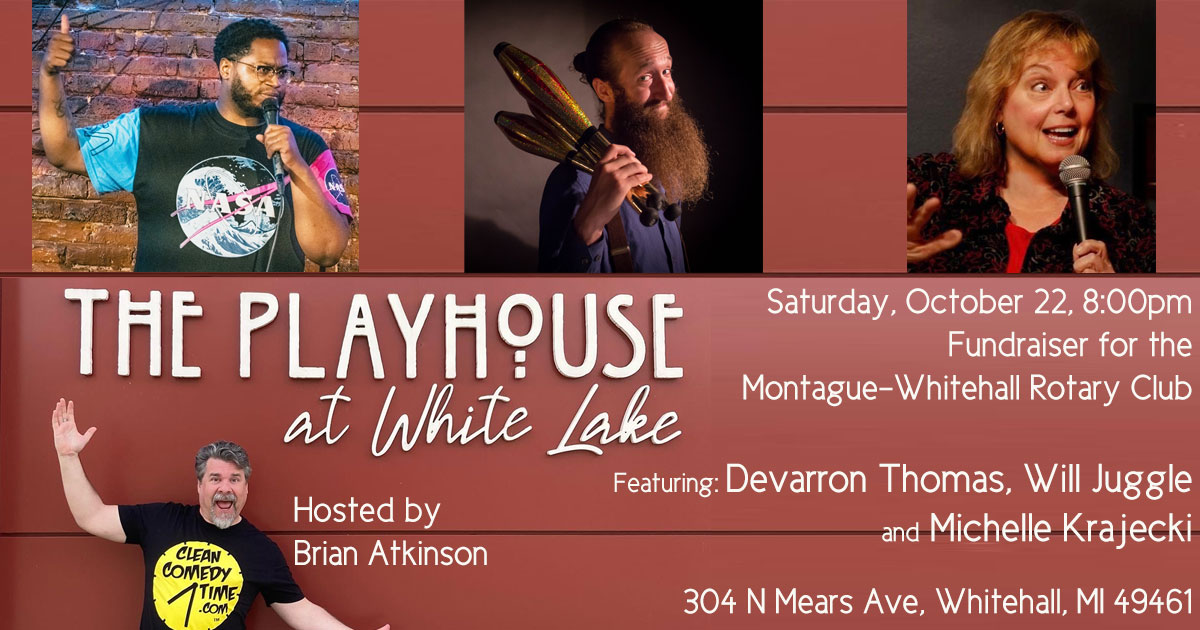 Brian Atkinson is a comedian, all-around nice guy, and a horrible person. His good guy persona often gives way to surprising twists that will keep you laughing. While his voice might be the first thing you notice, his confidence, and engaging storytelling will keep you coming back. Brian Atkinson makes jokes, but only the finest artisan, hand-crafted, farm-to-table-saw jokes.
Brian has opened for the legendary Bob Nelson, Dennis Regan, Jeff Jena, Kira Soltanovich, and Bob Smiley. He has provided voices for a PBS Kids show while also appearing in a Lifetime Movie Network movie, as a serial killer, in the same studio, on the same day.
https://BrianAcomedian.com/

When you see Devaaron Tomas, “apathetic mastery” is what comes to mind. Devaaron was raised in Detroit and lives in Grand Rapids where he’s performed at the Gilda’s Laugh Fest comedy festival. He’s also appeared on stage in New York, Austin, TX, and Amsterdam over the last 8 years. Combining his nonchalant view of the world with his experiences, Devaaron achieves sharp insight into what makes us tick and even more importantly what makes us Laugh.

As a plucky schoolboy with a burning desire to entertain, Will began honing his performance skills. Tiring of his day job, by age 10, he began impressing crowds on nights and weekends as his mother chauffeured him around the suburbs of Chicago. He has since opened for the Presidents of the United States of America, charmed hordes of Harley riders, enchanted university students, and entertained at corporate events across the nation. His relentless devotion to his craft has left him with amazing skills and very few friends. You will laugh at his unique brand of humor, and become filled with awestruck wonderment at his champion juggling skills and award-winning beard.
http://www.willjuggle.com

Michelle is a native Chicagoan who performs all over the Midwest and beyond. She performs in clubs, corporate events and churches. Michelle is a core member of The High Fiber Comedy Show and has toured with Flashback, Funny Forward, a vaudeville review. She is a former Special Education teacher and stay at home mom turned stand up comic. She began by training at The Second City center in Chicago. Her comedy has been described as ‘observational’, ‘relatable’ and ‘hilarious’.
https://michellekcomedy.com

The Playhouse at White Lake